Covering Up My $50K Tattoos - But Will I Like it? | TRANSFORMED

Added 7 months ago by admin
35 Views
AFTER covering her body in tattoos, Casey from Tauranga, New Zealand, thought it would be fun to get them covered up for the day - but this isn’t just an exercise in what Casey would look look like without tattoos, as she is beginning the process of getting some of her inkings permanently lasered off. Casey estimates she has over 50 tattoos and has spent approximately $50,000 on them. Her most recent tattoo was a large face tattoo, which she has now decided, along with her other face tattoos, to laser off. Casey got her first tattoo when she was 14 and credits them with giving her a new found confidence compared to her childhood years. She lived in Melbourne for 9 years where there is a strong tattoo culture and she never felt out of place with her inked look, but after moving to the Gold Coast, Casey started to notice how her tattoos made her stand out in public. Unable to go for a walk or a drink without being stared at, Casey started to feel more self conscious about her appearance - something that had never previously bothered her. Working as a venue and general manager for bars and clubs, Casey’s tattoos weren’t a big deal, but after the pandemic hit, Casey changed direction work-wise and has been working with special needs children. This is something she’d love to do more of and she believes removing her face tattoos is a big part of being taken more seriously in other industries. Casey told Truly: “When people see me a lot of the time I get told, ‘Ah you’re a beautiful girl, why did you do that to your face? Or, ‘Is she a criminal?, ‘Is she affiliated with a gang?’”That said, Casey still loves the rest of her tattoos, describing them as “a roadmap of your life” and has no plans to get rid of any of them permanently. She said: “I just like that I’m unapologetically me. I have power over who I look like.”
https://www.instagram.com/thetattooedheart/

Covering Up My $50K Tattoos - But Will I Like it? | TRANSFORMED 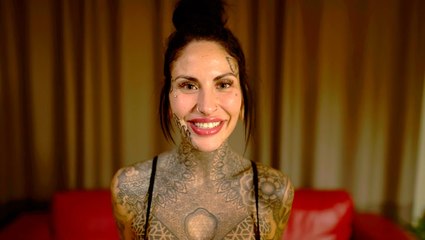 AFTER covering her body in tattoos, Casey from Tauranga, New Zealand, thought it would be fun to get them covered up for the day - but this isn’t just...