I'm A Successful Businesswoman - So Why Am I Judged For My Tatts? | HOOKED ON THE LOOK

Added 7 months ago by admin
43 Views
MONAMI FROST, 27, is 90% covered in tattoos and piercings - but she hasn’t let the stereotypes about body ink get in the way of her dreams. Originally from Latvia, Monami admits she didn’t let other people’s judgements stop her from covering her whole body. She told Truly: “It started off as just getting one tattoo and slowly I wanted more. You get one and you start feeling addicted, you need more.” The majority of Monami’s body and face is covered, and she reckons she’s spent around £25,000 on her ink and piercings since starting at age 14. Despite much of her skin being taken up by tattoos, Monami says she’s eager to get all of her body covered, adding: “There are still places where I don't have tattoos, it just feels really strange to me”. After moving to the UK, Monami, also a mum to two daughters, started to think about her next steps, and set up not one, but two new businesses, and also released her own cookbook. Monami told Truly: "You wouldn't see the tattooed girl having a recipe book and I thought it would be a good way to kind of beat some sort of stereotype. I believe that everything is possible and you just have to want it well enough.” Even with her huge success, Monami says people still judge her for her tattoos, particularly when it comes to being a mum. She adds that online, she gets comments ‘on a daily basis’ about parenting with tattoos. Monami admits: “What would I say to people that judge me for my tattoos? Don't judge a book by its cover.”
https://www.instagram.com/monamifrost/

I'm A Successful Businesswoman - So Why Am I Judged For My Tatts? | HOOKED ON THE LOOK 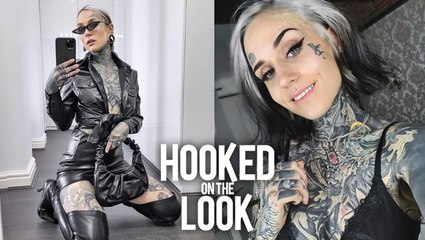 MONAMI FROST, 27, is 90% covered in tattoos and piercings - but she hasn’t let the stereotypes about body ink get in the way of her dreams. Originally...